A couple of months ago I wrote about the new law related to mining in the conflict areas of Democratic Republic of the Congo (DRC). The minerals from these mines are important for various consumer electronics companies (Apple, Dell, HP, Intel, Nokia, etc.)

Swedwatch and Finnwatch have just released a new report about the effects that this law and other similar measures seem to have. Here are some quotes from the report:

“A lot of attention has been given to the fact that we all, as consumers purchasing personal electronic devices, are linked to the conflict in Eastern DRC. Many argue that we must demand that companies stop buying conflict minerals and so cut off  the funding of armed groups. Skeptics of the idea that ending the trade will stop the violence say it will only hurt an already extremely weak economy and make the local population suffer even more. They underline the fact that more than two-thirds of the revenue of a province like North Kivu is from mineral exports. Even though none of the NGOs or the legal initiatives actually promote an embargo in the sense of ending the mineral trade from the whole of Eastern DRC or even the whole of the DRC, many point out that it is likely to be the effect, especially before initiatives for a trustworthy certification schemes are in place. The local research-based Pole Institute is of the opinion that the dilemma becomes even greater when the mining industry is criminalized without offering an economic alternative to a possible boycott of these minerals.”

“One important question is whether it is actually possible today to source ‘conflict-free’ minerals from Eastern DRC. There are varying degrees of involvement from armed groups, just like there are also varying degrees of legality. IPIS estimates that for the time being is that there is not a single mine in Eastern DRC where there are no security problems at all. In other words, if there are very strict requirements regarding taxes to armed groups and no involvement of armed groups in the mineral trade at all, at the moment, it means it is not possible to source minerals from Eastern DRC at all. This is an option that Karen Hayes foresees could lead to more insecurity in the region: “Potential exclusion of mines from the traceability system with resulting loss of their legitimate market could have major impacts. This could leave mines with the options of (a) closure – resulting in loss of livelihoods, migration forced by economic need, new resource confl icts as miners try to find new sites, new debt as new sites are developed, etc; (b) continued mining and trading but with only illegal actors or buyers who are unscrupulous about their sourcing; (c) a move away from the restrictive tin/tantalum/wolframite market towards the more lucrative and secretive gold mines and markets where traceability is a huge challenge.””

“Although most of the interviewees were pleased with the fact that the three main parties in the debate on mineral resource exploitation in Eastern DRC – the Congolese authorities, private companies and civil society groups – were finally talking about solutions to the problems of conflict minerals and illicit mineral trafficking, there was some resentment about the fact that policy makers seemed to pay almost no attention to the socio-cultural context in which mining activities take place. A recurrent criticism of policy makers at the national and international level was that the latter seem to care more about the reputation of foreign companies interested in buying Congolese minerals than in the well-being of the people living and working in and around the mines. There was a widespread feeling that it was high time to tackle problems such as the use of physical violence, the establishment of predatory taxation systems, and the creation of illicit trade monopolies by military actors. In addition to this, it was also felt that policy makers need to do something about other mining related issues such as land rights, forced labour and sexual violence against women, that had only received scant attention.”

Coltan mining in the Democratic Republic of the Congo (DRC) is a rogue industry that produces financial profit for the various factions of the on-going civil war. This issue has been discussed in artist/activist circles for some years already, but there have been no signs for any solution to this problem.

This situation unexpectedly changed last week, when US Senate passed a new bill that requires companies to disclose whether they are sourcing coltan or other minerals from the DRC or adjoining countries. Companies have to provide details about the measures they have taken to avoid sourcing these minerals from DRC armed groups, which are guilty of massacres and other atrocities. This means that companies like Apple, Dell, HP, Intel and Nokia can no longer wash their hands of this issue.

The move by US lawmakers can perhaps be partly explained by commercial motives. The fact that China has become the number one supplier of many important metals has recently raised concern in US and Europe (see article in New York Times). Increased transparency in mineral industry is likely to increase the mineral prices, and this might turn mining and other related industries into profitable business again in Europe and US.

Although the new law can be seen as a positive first step towards more fair consumer electronics, it can also have negative side effects. The new law might result in a complete boycott of minerals from DRC, which might make the local situation even worse. Also auditing the supply chains is a complex task and probably prone to corruption.

According to a report by Finnwatch, the raw materials from Congolese mines are traded by Belgian trading houses to ports in Kenya and Tansania. From there the materials are transported to Thailand, Malesia, India and China where the worlds biggest foundries are located. In the case of Nokia, after the foundry has extracted the metal, there are still 4 or 5 more middlemen before the metal ends up in a ready Nokia product. According to an article in Taloussanomat (in Finnish), Nokia requires their material suppliers not to use minerals from conflict areas, but the new law will require Nokia to do more extensive auditing. 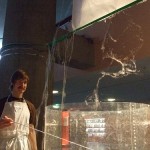 During the three days that our brave Cotton Candy experimentation team spent enclosed in a small room in Collegium Hungaricum Berlin, we learned quite a few things:

– Cotton candy is a challenging material to work with. The temperature has just high enough for the sugar to melt but low enough for the plastic candy machine itself not to melt. If one wants to use color effects, these need to be applied beforehand – once sugar is reached its fluffy and flying cotton candy form, it’s very difficult to apply any extra effects to it. Refilling the machines on the fly (when they are hot and rotating sugar at high speed) was also not a very easy thing to figure out.

– Cotton candy is great material for art about environmental issues – it’s made of pure white sugar that gives us pure solid energy to burn. Very efficient and very unhealthy. The sugar we bought in Germany said ‘Made in Germany’ in the package while it’s obvious that it has been grown by some low-wage workers in Africa or South-America. Eating cotton candy is also a ritual, a ceremony associated with places such as circuses or fun fairs –  places that have been designed for the kids to have fun and for the parents to… pretend to have fun?

– Compared to the English words cotton candy and candy floss, the Finnish and French equivalents ‘hattara’ and ‘barpapapa’ are more interesting and versatile. The word hattara can be applied to all kinds of fluffy things (clouds, hairdos, etc) and it has a connotation of superficiality. In addition to Barpapapa comic book characters, barpapapa also means ‘daddy’s beard’.

Some of the concrete results (see photos above) we achieved were the Cotton Candy Tornado (Aleksi Pihkanen was the main chef), Cotton Candy Crystals (by Christopher Baker) and the ‘redemption ritual’ (design by Tuomo Tammenpää). These were the side effects of the main purpose of the workshop: to bring an interesting bunch of people together to hack, chat and have fun for a few days. Thanks a lot for crew of Kitchen Budapest and Tinker.it for the good times and for Transmediale 09 for hosting us!