A short summary of the lectures Casey Reas and Marius Watz at Lume Media Centre, an event which was organised by PixelACHE & friends (see earlier posting). 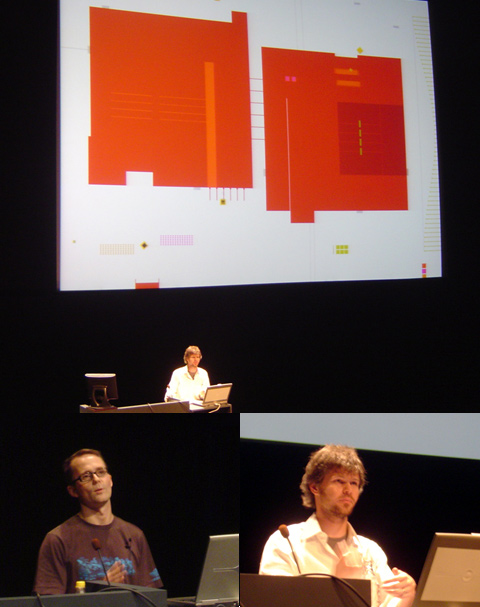 Casey and Marius arrived to Helsinki straight from the Generator.x conference / exhibition in Oslo, an ambitious project initiated by Marius Watz. Generator.x brought together an international group of artists / designers / researchers to explore ‘the current role of software and generative strategies in art and design’.

Marius quoted the definition of generative art from Philip Galanter:

Generative art refers to any art practice where the artist uses a system, such as a set of natural language rules, a computer program, a machine, or other procedural invention, which is set into motion with some degree of autonomy contributing to or resulting in a completed work of art.

(here is the academic paper where the quote is from)

Another relevant quote from Generator.x:

True literacy means being able to both read and write. If to use pre-existing software is to “read” digital media, then programming is the equivalent to writing. The Generator.x project focuses on artists and designers who embrace this new literacy not as a technical obstacle, but as a way to redefine the tools and the media they work in.

This is a slightly modified version of an original statement from Alan Kay:

The ability to ‘read’ a medium means you can access materials and tools created by others. The ability to ‘write’ in a medium means you can generate materials and tools for others. You must have both to be literate. In print writing, the tools you generate are rhetorical; they demonstrate and convince. In computer writing, the tools you generate are processes; they simulate and decide.

The presentations by Casey and Marius were chronological, they both started by telling how they first got involved in software design / generative art and continued to elaborate on how their own practise and they whole field had evolved during the past few years.

Casey mentioned book ‘Vehicles, Experiments in Synthetic Psychology’ by Valentino Braitenberg as an influential source for his earlier projects such as tissue software. There is an article by Casey about this in the Ars Electronica 2003 catalogue.

Both Casey and Marius mentioned several reasons why software programming and other generative methods can be interesting for contemporary design and art:

* Designers (and artists) often accept to work with certain materials which are available to them. In the case of software it’s possible to create ‘new materials’ and reach new kind of results. (Marius)

* The focus in design changes from composition and color to other qualities such as mass and texture (Casey) or movement and intelligence (Marius). Marius presented one example of his work where he had tried to let go of deciding the colors and instead allowing the generative algorithms make the decisions.

* The work is continous, it has no beginning or end (Casey).

* Work is non-material and in it’s essence can be described as a set of instructions (Casey).

Casey told that some sources of inspiration for his recent work are artists like Sol LeWitt, Yoko Ono and John Baldessari. These artist have created projects which are simple instructions for a performance. The instructions always contain a certain amount of ambiguity and therefore each performance (each instance of the work) is unique. Casey has transformed this same logic into his software projects in search for a similar ambiguity and a more ‘pure’ manifestation of his work (here is an article by Casey describing the relationship of software and the work of Sol Lewitt).

Both Casey and Marius thought that the correct way to show their work is to show the software ‘running live’ on a computer. The result can run on a better resolution and framerate than video or DVD and also the work has it’s generative character – the work is different every time it’s viewed.

One surprise highlight of the presentations was when Marius suddenly decided to demonstrate the VVVV programming environment and through a jumpy but very rapid process managed to create a simple sound reactive visualization.

Casey also gave a short presentation about the Processing software development environment. Casey is the other main developer of processing, a project which he initiated together with Ben Fry. Casey told that the goal for processing tool was to ’spawn a programming culture for design and arts community’. This sounds like a grand undertaking but Processing has so far reached a pretty good position in this regard.

Other important aspects of Processing environment are:

– It’s open source
– It runs on pc / mac / linux
– It encourages open source way of working; as a default it creates a link to the source code when you publish your work online
– It’s international; the group of developers and activities have been very international from the beginning

A couple of additional quotes:

– “My visual work is in the grey area between the really beautiful and really really ugly.” (Marius Watz)

We spoke about the context for generative art/design and specifically about artist LIA who crosses back and forth over the boundaries of art, design and club culture but refuses to provide any rational explanation of her work or her obscure interfaces. The comment from Marius is a positive view that ‘good art/design will win at the end’, regardless of who did it and why/how it was done.